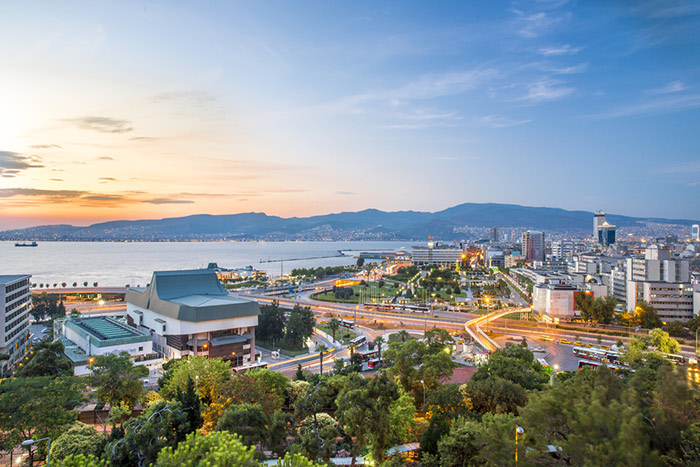 Izmir was described as a city which was founded ‘under the most sublime blue sky and on the most remarkable climate of the world’ by the historian Heredot. Throughout all of its 8.500- year-old history it has been a major settlement area. Its convenient location, suitable climate and his hinterland which has fertile soil of agriculture, its bay that was described by a western traveler as, ‘a gulf that could hold all the ships in the World’, and its sheltered port are the main characteristics of İzmir that explain its existence during all the periods.

Throughout its history, Izmir, ancient Smyrna, has been a place of lively trade, culture, and art center. In addition to the sea-sun-sand trio, Izmir has been offering cultural tourism opportunities with the museums and the ruins of Ephesus and Pergamum.

Also for centuries, Izmir has been hosing with great respect and tolerance the sacred chapels of the three theocratic beliefs; mosques, churches, synagogues, and with these values hold a distinctive place in faith tourism. The House of Virgin Mary, St. John’s Basilica where Jesus Christ’s most favored disciple, St. John’s tomb is, The Ephesus (Efes), Smyrna (Izmir), Pergamum (Bergama) the locations of three of the seven churches mentioned in the bible (founded to propagate Christianity in Anatolia) are important religious sites for Christianity and the fact that they are all within the borders of Izmir. This impacts the city’s importance in terms of faith tourism..

Izmir has earned a well-deserved reputation due to the ruins such as Ephesus the most beautiful Ionian city of antiquity, Bergama which houses an important health care center of Asklepion. Bergama is leading health center of Anatolia. The double serpentine column which is the symbol of medicine has its origins in Pergamum. It hosts one of the largest Asclepions of the antique age dedicated to Asclepius, the god of Health. A tablet attracts attention at the monumental entrance gate of the Asclepion, where the methods of curing by instilling and music were applied fairly well ‘No entrance by illness’.

The thermal springs in İzmir are used since ancient times and utilized since have long been known as the Springs of Agamemnon the king who led the Greeks in their war with Troy. The springs which have modern thermal facilities now, give health therapies with modern medical techniques. Also, Inflammatory Rheumatic Diseases, Bone Metabolism Diseases, Degenerative Joint Diseases in the thermal cure centers and eye treatment, dental treatment, organ transplantation, diagnostic and medical operations in the modern hospitals are well performed in İzmir. It is not only an attraction center or thermal and health center fort he Aegean Region, but also it is a center in national terms with its educational services, cultural and art activities. Because of this, as in the past, today Izmir remains as the shining star of the Aegean.